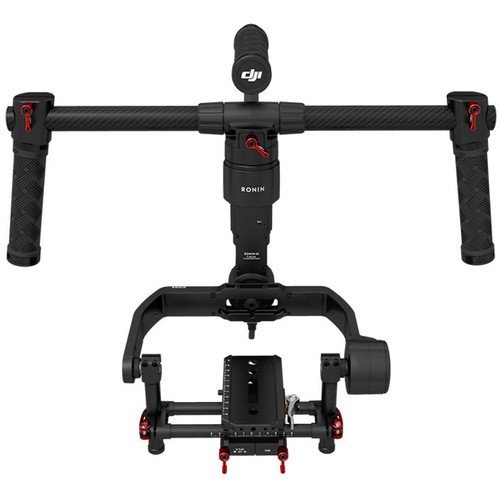 The Ronin-M 3-Axis Handheld Gimbal Stabilizer from DJI is a camera stabilization system designed to give the operator close to the freedom of unencumbered handheld shooting but without the hand-shake. Suitable for most camera types and configurations up to 8 pounds, the Ronin-M uses brushless motors that work on three axes: one for side-to-side “roll” – keeping the horizon level – one for tilt, and one for pan. The system is computer-controlled and features a tilt range of 105⁰ up / 165⁰ down plus a roll range of ±110⁰. Furthermore, the system boasts a precision of control of ±0.02°, enabling precise camera moves and stability correction against even very fine movements. In addition to handheld shooting, the gimbal can be used in vehicle mounting scenarios and other contexts where vibrations or other abrupt movements would make tripods and rigid camera support systems unsuitable.

The Ronin-M supports dual-operator shooting, much like working with a jib that has a motorized pan/tilt head. In this mode, a second operator would use the included transmitter (radio controller) to manually control camera pan and tilt independently of which way the Ronin-M itself moves. The included transmitter/receiver system operates on 2.4 GHz and is proprietary. If you prefer to use a third-party transmitter there is a D-Bus port on the Ronin-M to install your own receiver