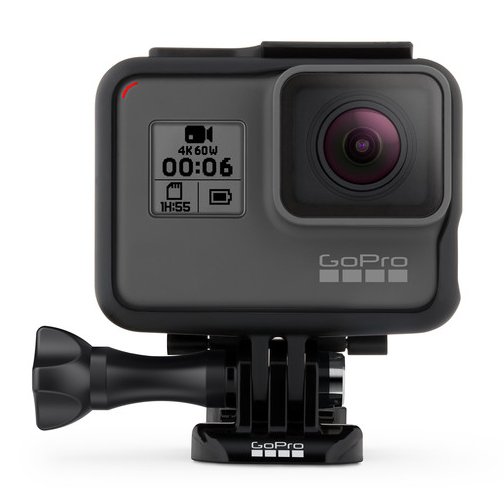 GoPro HERO6 Black Camera delivers GoPro’s best image quality yet! While the HERO6 and its predecessor may appear nearly identical, GoPro boasts that the new model delivers twice the performance. But what does that mean? One of the most notable new features is the improvement in slow motion capabilities. 4K60 and 1080p240 make the frame rate of the HERO6 nearly twice that of the 5. Another big upgrade is the improved image stabilization. GoPro has added an additional axis, making diagonal and rotational movements much smoother. This supports 4K30 and 1080p120. The 6 also has a warp-correcting hardware built right into the camera! This distortion correction is one of the bigger and more noticeable differences in stabilization between the HERO5 and HERO6. The HERO6 also brings huge improvements in terms of general image quality.

The optimized GP1 processor brings higher frame rates in 4K, 2.7K, and 1080p HD resolutions. Where previous models maxed out at 30 fps in 4K, the HERO6 Black can muster 60 fps for rendering smooth motion or even slow motion in timelines with slower frame rates. Other processor-intensive tasks, such as image stabilization, have also been improved in the HERO6.

The rear side of the camera is dominated by a 2″ touchscreen LCD for quickly navigating menus. Once your settings are locked in, the classic one-button interface can take over for quickly starting and stopping recording and changing settings on-the-fly. If your hands are occupied, simple voice commands can start and stop recording, take a photo, or burst of photos, and more.

A widened color range, more detail and texture, and higher contrast are amongst the qualities that the newest GoPro brings to the table. It also features an HDR mode for still photos – and hopefully soon, video. Other notable features include improved low-light capabilities and voice command. However, this model maintains its rugged casing and is also waterproof out-of-the-box up to 33 feet. All of these things make the GoPro HERO6 the perfect adventure camera!